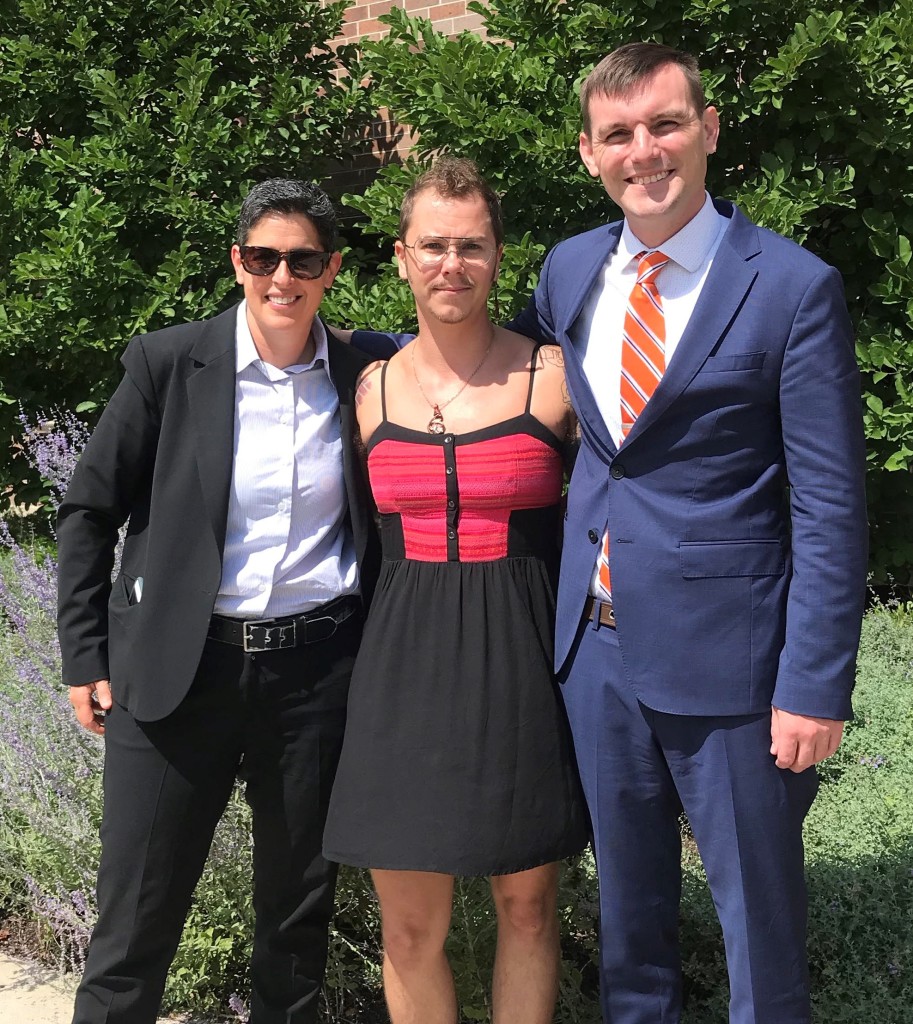 On August 12, 2017, Lee was exercising their Constitutional rights to freedom of speech and assembly at the Slutwalk Chicago march alongside more than 100 other people. During the march, members of the Chicago Police Department attempted to force the demonstrators off the street and onto the sidewalk and arrested several demonstrators in the process. As the remaining protestors were demanding their release, a Chicago Police Officer grabbed Lee’s bicycle, causing both Lee and the officer to fall to the ground. As a result of the aggressive action by the police, Lee’s bicycle fell on top of Lee. Several police officers advanced toward Lee, and while Lee was on the ground, in the midst of being handcuffed, an officer stepped on Lee’s head and ground it into the pavement.

Lee sustained an open cut in the midst of their arrest, and after being transported to the police station, Lee disclosed to the police they are HIV+, out of an abundance of caution and due to their knowledge of the criminalization of HIV/AIDS.

Lee was then falsely charged with Aggravated Battery on a Police Officer (for allegedly biting an officer on his ankle) and Resisting Arrest.

Lee was the only person arrested at the Slutwalk 2017 who was charged with felonies. All the other individuals arrested were charged with misdemeanors or ordinance violations, and their cases were resolved with fines and/or community service.

In the course of the criminal case, Lee’s attorneys obtained video from the body-worn cameras of the officers at the demonstration. The footage demonstrated clearly that Lee did not bite or attempt to bite any officer.

Organizing on Lee’s behalf, the defense committee also secured the support of 30 local and national LGBTQ and HIV/AIDS advocacy organizations. These groups signed onto a letter delivered to the Cook County State’s Attorney’s office in July 2018 demanding that all criminal charges be dropped.

After receiving this letter, the Cook County State’s Attorney’s Office dropped all criminal charges against Lee. In exchange, Lee pleaded guilty to violating the Chicago municipal ordinance regarding public assembly (a non-criminal offense). As part of the resolution, Lee was required to pay a $200 fine and do community service. In a remarkable move, the Cook County State’s Attorney’s Office recognized that the outstanding organizing that Lee has done for years constitutes community service. The judge agreed that Lee had satisfied all community service requirements in light of their work as the lead organizer for CommunityCave Chicago, as well as their work as the treasurer of the board of Upswing Advocates, and their membership on the community advisory board of the AIDS Foundation of Chicago.

Lee’s charges in this case fit into a disturbing pattern of cases nationwide where LGBTQ people and people living with HIV/AIDS have been falsely charged or over charged based on their gender identity, sexual orientation, and/or HIV/AIDS status. This problematic trend is often based on homophobic and transphobic notions that LGBTQ people are prone to commit violence or wish to spread disease.

For decades, lawyers from People’s Law Office have represented people criminalized based on their LGBTQ, gender non-conforming, or HIV/AIDS status. In fact, Mogul, who represented Lee, co-authored the book Queer (In)Justice: The Criminalization of LGBT People in the United States (Beacon Press, 2011) about the policing, prosecution and punishment of the LGBTQ community in the U.S. criminal legal system.

“We are delighted that Lee is now able to return to their life without the threat of prison hanging over their head. While Lee should not have had to endure any prosecution at all, this resolution of a felony criminal case is uniquely positive and was only made possible because of the strength of Lee’s community, including the defense committee, legal team, and supporters. Above all, Lee’s bravery in fighting this case and demanding dismissal of all criminal charges was the core ingredient in this successful outcome,” said Sharlyn Grace, co-Executive Director of the Chicago Community Bond Fund and member of Lee Dewey’s defense committee.

In response to the resolution of the case, Lee said, “I did not require this firsthand experience in order to dedicate my time, labor, and love to the abolition of the police force and the prison industrial complex, which movement I have long added my voice to. There is much utility in this experience, however, and it will inform my personal activism in our collaborative work for much time to come. All of my love and appreciation to my family, friends, communities, and comrades: I could not have done this without each and every one of you. Positive radical change is not only possible, it is necessary, and together we will change this world. Thank you.”