Lewis Gardener and Paul Phillips were wrongfully convicted of acting as lookouts for a 1992 murder and spent nearly 15 years in prison.  In January of this year, lawyers from People’s Law Office filed a petition seeking to overturn their convictions.  Yesterday, June 24, 2014, the State’s Attorney agreed and asked the judge to vacate the convictions. 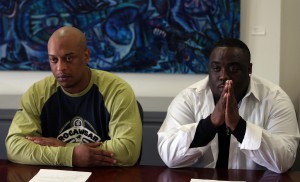 One of these co-defendants, Daniel Taylor, was convicted and ultimately exonerated, after it was exposed that police and prosecutors withheld crucial evidence.  One of those pieces of evidence was that Taylor was in police lockup at the time of the murder.

The next step for Phillips and Gardener is to obtain Certificates of Innocence so they can receive compensation for the years they spent in prison for a crime they did not commit.

For more coverage of this recent development, read the Chicago Tribune story by Steve Mills: Judge Tosses Convictions of 2 Who Spent 15 Years in Prison

This case is part of our ongoing commitment to helping fight wrongful convictions and cases of false imprisonment.  The injustices of the criminal legal system in this country run deep and wide and these examples of wrongful conviction expose the problems in the system.  For more information on our work on the issue, visit the Wrongful Convictions page on this site.

If you or a loved one were wrongfully convicted and you are interested in filing a civil rights lawsuit, contact our lawyers at (773)235-0070.