On Friday March 3, 2013, former Chicago Mayor Richard M. Daley filed his opposition to Chicago police torture survivor Ronald Kitchen’s motion for a court order compelling him to sit for a sworn, videotaped deposition. This is the latest skirmish in a nine year long legal battle to force Daley to answer about his central role in the police torture scandal and its cover-up. This involvement began with his refusal, while the elected State’s Attorney of Cook County, to prosecute Jon Burge, the mastermind of a now notorious police torture ring, when damning evidence of Burge’s sadistic brutality was first presented to him in 1982; continued on his watch as scores of African American torture survivors were subsequently prosecuted and wrongfully convicted on the basis of tortured confessions; and culminated with his role in the cover-up of the scandal after he became Mayor. 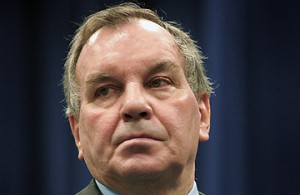 When public attention was drawn to Daley’s involvement in the torture scandal in 2006, he gave a short statement to the Special Prosecutor who was in the final stages of investigating Burge and his confederates. Not surprisingly, the questioning by the Special Prosecutor, who was a political disciple of Daley’s father, Mayor Richard J. Daley, consisted of a series of “softballs” interspersed with apologies for having the temerity to question such an important politician. The following year a federal judge ordered Daley to submit to a deposition in a case brought by torture survivor Madison Hobley, but the case was settled before the deposition occurred. In 2010, torture survivor Michael Tillman successfully joined Daley as a defendant in the racially motivated conspiracy that led to Tillman’s torture and wrongful conviction, but despite the court’s groundbreaking decision, Daley nonetheless resisted sitting for a deposition. Once again, the case settled before Daley had to face the music.

Now the lawyers for Ronald Kitchen, another Burge torture victim, seek to depose Daley. Kitchen, who gave a false written confession to one of Daley’s prosecutors, would not have been tortured and wrongfully convicted if Daley had acted six years earlier by prosecuting Burge. In one of his last acts before switching hats to become Chicago’s Mayor in 1989, Daley personally approved his prosecutors’ request to seek the death penalty in Kitchen’s case. Convicted on the basis of his coerced confession, Kitchen joined nine other Burge torture victims who were sent to death row with Daley’s approval. Twenty-one years later, Kitchen was exonerated and awarded a certificate of innocence by the Cook County courts.

After Daley was subpoenaed for deposition, his lawyers stalled for several months, requesting conferences with Kitchen’s lawyers at which the reasons for the deposition were further debated.  Daley’s private lawyers, who are handsomely paid with taxpayer funds, argued that his testimony was not relevant to the case and articulated Daley’s fear that the deposition video would be made public.  Finally, they conceded that which was apparent from the beginning — that they would not voluntarily present him, no matter what compromises Kitchen’s lawyers were willing to make. Thus Kitchen’s lawyers were forced to file a motion to compel Daley’s testimony, which set forth the basis for the deposition and the areas of questioning. Daley, the master of media manipulation, arranged to file his opposition late on Friday afternoon, no doubt so that the major news outlets, which have shown substantial interest in this issue in the past, would not pick up on it.

Daley’s opposition, which relied heavily on his longtime position as Mayor, attacked Kitchen’s lawyers, who have been instrumental in developing the evidence of Daley’s alleged complicity in the torture conspiracy, asserting that: Somewhat predictably, plaintiff [Kitchen’s] counsel has once again rekindled a longstanding personal campaign to subject former States Attorney/former Mayor Richard M. Daley, a nonparty, to a deposition. This ongoing quest at best is tantamount to a fishing expedition. More ominously, it suggests an unsubtle attempt to orchestrate media attention and generate pre-trial publicity rather than seek legitimate discovery. Not only are plaintiff’s proposed reasons for seeking the deposition suspect, he has not demonstrated a compelling need for the deposition

Ignoring Daley’s documented role in the racially motivated torture conspiracy, his lawyers highlighted the fact that there exists on You Tube a “one sided” video that features Kitchen describing his torture and shows Burge taking the Fifth Amendment and his fellow abuser, Michael Kill, proclaiming that he has used the “n-word” more than a million times.  Rather than a deposition, where he would be subjected to rigorous cross examination, Daley’s lawyers have again proposed in their opposition that he answer, no doubt with his lawyer’s skilled assistance, a limited set of written questions, a proposal that Kitchen’s lawyers have repeatedly rejected.

It is truly ironic that the once all powerful Mayor of the City of Chicago, who previously exerted near total control of the Chicago media, now so fears an under oath accounting of his 30 year involvement in the police torture scandal that his lawyers have filed his opposition in what amounts to the dead of night. Moreover, the question so frequently heard, particularly in the African American community — why are the taxpayers paying his high priced lawyers to continue to orchestrate this duck and dodge routine — has once again raised its ugly head.  As Daley continues to hide from a robust interrogation of his role, his well-deserved legacy from the torture scandal and its continuing cover-up continues to darken.