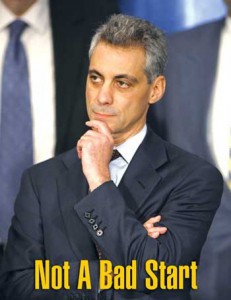 Mayor Rahm Emanuel apologized Wednesday for the torture of black suspects by former Area 2 Commander Jon Burge and his cohorts after the City Council approved $12.3 million in additional settlements to alleged torture victims.

Emanuel issued the apology that victims’ attorneys have long demanded after authorizing a third round of settlements that spared former Mayor Richard Daley from answering questions under oath.

Identical, $6.15 million settlements will go to Ronald Kitchen and Marvin Reeves, who spent 21 years in prison for a 1988 murder of five they did not commit, only to be released and exonerated in 2009.

Kitchen’s lawsuit alleged that he was arrested after an erroneous tip from a convicted burglar-turned-jailhouse informant and was beaten with a phone book and a telephone receiver and had his genitals bashed with a nightstick during 16 hours of questioning.

“I am sorry this happened. Let us all now move on,” the mayor said.

“This is a dark chapter on the history of the city of Chicago. I want to build a future for the city. . . . But, we have to close the books on this. We have to reconcile our past. . . . Yes, there has been a settlement. And I do believe that this is a way of saying all of us are sorry about what happened…and closing that stain on the city’s reputation . . . . That is not who we are.”

Emanuel has been trying to clear the books of the costly Burge cases he inherited to turn the page from the reign of terror that has severely undermined the trust between citizens and police in the African-American community so pivotal to solving crime.

Flint Taylor, an attorney for Kitchen, applauded Emanuel for issuing the long-overdue apology to torture victims, their families and the African-American community at large.

“It’s important that he has acknowledged that it is a dark stain on the history of the city and he’s sorry for it. That is certainly a step forward from what Mayor Daley refused to do,” Taylor said.

“It’s symbolically important that the city recognize that its Police Department, its former mayor and state’s attorney were grievously wrong for the scandal and cover-up.”

But, Taylor said Emanuel’s apology is not enough. The city should also establish a $20 million fund — equal to the amount spent to defend Burge and his cohorts — to compensate torture victims who couldn’t sue because of what Taylor calls a “cover-up” by the city.

“Until . . . torture victims are properly compensated, the wound on the city of Chicago will not heal and its conscience will not be cleansed,” Taylor said.

Burge was convicted in June 2010 of perjury and obstruction of justice for lying in a civil court case when asked if he knew of the alleged torture that went on under his watch. He is serving a four-year sentence in federal prison.

The settlements approved Wednesday bring the tab for police abuse and misconduct cases resolved this year to at least $77 million. The city’s overall tab for Burge-related cases now tops $83 million — and tops $95 million when county funds are included.

Also on Wednesday, the City Council agreed to spent $2 million — and up to $1.7 million more in legal fees — to compensate dozens of women denied firefighters jobs because of a discriminatory test of physical abilities that measured upper body strength, but had nothing to do with the job.

The $1.98 million will be divided among roughly 50 women who are now beyond the Chicago Fire Department’s mandatory age limit of 38.

In all, 183 women were discriminated against after having passed a 2006 written exam, but failed a 2010 test of physical skills that the city has now scrapped.

This article was published today in the Chicago Sun-Times.