June is Torture Awareness Month, and this year the National Religious Campaign Against Torture has declared its theme to be “healing a culture of torture.” So once again it is time to review what, if anything, Chicago public officials have done to cleanse the conscience of a City stained by the long running Jon Burge torture scandal. 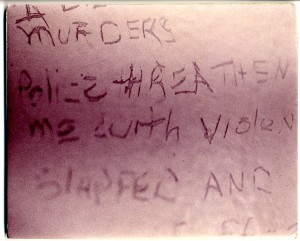 Lets start with the Feds. After showing great resolve in indicting and convicting Area 2 torture ringleader Jon Burge for perjury and obstruction of justice, the U.S. Attorney’s Office failed to finish the job, allowing the perjury statute of limitations to run out last fall on two of Burge’s “right hand men” who served as long time stalwarts on Burge’s midnight crew of self annointed “asskickers.”

Several of our local U.S. Congressmen have also failed to support the effort to prevent future Jon Burges from escaping justice. When Congressman Danny Davis re-introduced the Law Enforcement Torture Prevention Act early last year, Reps. Jan Shakowsky and Mike Quigley inexplicably refused to join Congressmen Bobby Rush, Luis Gutierrez, Bobby Scott, and Jesse Jackson Jr. in supporting it.  The Bill, which would have, for the first time, made police torture a federal crime without a statute of limitations, quietly died later in the year.

Cook County Special Prosecutor Stuart Nudelman, who was ultimately assigned to represent the State in those cases, while taking a more balanced approach than the State’s Attorneys’ Office, is still yet to concede that fairness requires new hearings  for all these imprisoned torture survivors at which they can present all the evidence of systemic torture that was not available when they were convicted decades ago.

After the Illinois Torture Inquiry and Relief Commission returned decisions last June that provided for new hearings for five Burge torture victims, the Illinois General Assembly cut off the TIRC’s funding, leaving  nearly 100 prisoner complaints uninvestigated. Fortunately, in response to community pressure and the work of State Senator Kwame Raoul, the legislature recently refunded the Commission and the complaints are again being investigated and resolved.

Once again, the City of Chicago and Mayor Rahm Emanuel have failed to shoulder its major share of the responsibility for healing the City. While the City Council passed a “torture free zone” resolution last year, the Council continues to look the other way while the “the pinstripe patronage” paid to the private defense lawyers who continue to defend Burge, Daley, and their co-conspirators in several still pending civil torture cases, has balooned  obscenely past $20 million in taxpayer funds. These lawyers continue to resist all efforts to obtain Daley’s testimony, and the City was roundly chastised a few months ago by a Federal Appeals Court panel of judges for their failure to concede that Burge and his lieutenants had covered up the torture scandal for decades.

The Mayor has also rejected repeated calls for him to issue an apology on behalf of the City to all the Burge torture survivors, their families, and the entire African American community, he and his lawyers have also refused to join Attorney General Lisa Madigan in her battle to strip Federal prisoner Jon Burge of his police pension, and he has intervened in New Orleans police matters to promote the candidacy of former Superintendent Terry Hillard, who was himself implicated in the effort to cover-up the Burge torture scandal, as the ‘independent” monitor of a Court ordered consent decree entered to curb similar police lawlessness in New Orleans.

The United Nations has designated June 26 as an “International Day in Support of Victims of Torture.” What if on that day, Mayor Emanuel, on behalf of the City and its Police Department, and Cook County Board President Toni Preckwinkle, on behalf of the County and the State’s Attorneys’ Office, stood in front of the old Area 2 “House of Screams” at 91st and Cottage Grove and issued a joint apology to all of Chicago’s citizens, together with a pledge to create a reparations fund to compensate those still suffering  survivors of Chicago police torture who were cheated out of lawsuits by the cover-up of the scandal. This fund could also be used to provide treatment for the psychological damage inflicted and for job training.  Perhaps Burge and Daley’s publicly funded lawyers could be “persuaded” by the City and its taxpayers to return a healthy portion of their ill-gotten gains to help to fund this effort.  Then and only then will the true healing begin.