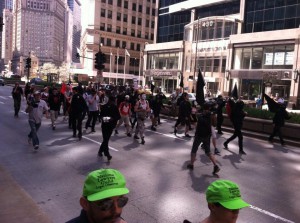 Today is May Day, also known as International Workers’ Day. It is being recognized by millions of working people throughout the world. For over a century, May Day has been a day of celebration for people struggling against exploitation and oppression. As a result, it is representative of a cross-section of our work in the National Lawyers Guild (NLG).

One of the aspects of the NLG that distinguishes us from most other legal associations is the class analysis we bring to our work within the law. As the preamble to our constitution states, we strive to be an “effective political and social force in the service of the people, to the end that human rights shall be regarded as more sacred than property interests.” This commitment to prioritizing the rights of people over property interests means that the Guild consistently represents workers in disputes with their bosses and supports movements struggling against capitalist exploitation and inequality.

Supporting workers’ rights has been an active part of our work since our founding in 1937. In the early years, Guild lawyers were active in the labor movement, helping to organize the United Auto Workers (UAW) and the Congress of Industrial Organizations (CIO). While mainstream legal organizations like the American Bar Association actively opposed the New Deal, the NLG drafted and defended New Deal legislation, along with other policies designed to improve the lives of poor people.

Our work supporting the labor movement continues today. In recent years, it has come to include working to oppose lawmaker attacks on unions, such as Scott Walker’s law stripping public sector workers of collective bargaining rights in Wisconsin. One of the NLG’s many committees is the Labor and Employment Committee (L&EC). The L&EC has chapters around the country that work with workers’ centers, unions, and community groups to advocate for economic justice.

Marches, rallies, and civil disobedience are key components of May Day. In recent years, May Day marches have also become important days of demonstration for immigrant rights. This connection has grown demonstrations and helped to highlight the intersections of labor exploitation and racist immigration policies. For years, members of the NLG Mass Defense Committees have provided legal support to May Day demonstrators. Legal support includes litigation for march and rally permits, providing Legal Observers®, and representing activists targeted for their involvement in protests.

For example, the Seattle chapter of the NLG has been representing activists who have faced grand jury subpoenas for an investigation ostensibly related to political vandalism during a 2012 May Day demonstration, as well as The Stranger newspaper, which is seeking to unseal the court records justifying the grand jury. The U.S. Attorneys’ Office has used a handful of broken windows as a pretext for a grand jury seeking to socially map the anarchist movement in the Pacific Northwest. Two activists spent five months in federal prison, including two months in solitary confinement for refusing to answer questions about their political beliefs. Neither has been accused of a crime.

Today, as you celebrate the history of the labor movement by marching in the streets and rallying with your fellow workers, know that NLG stands in solidarity with you and with all movements struggling for economic and social justice.