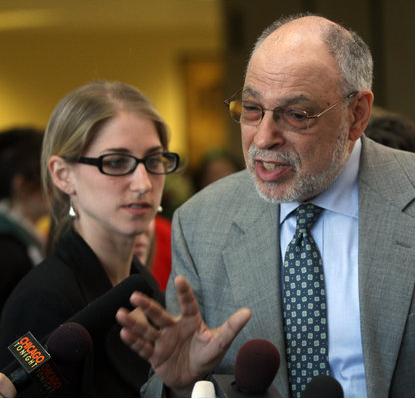 Brian Jacob Church, Jared Chase and Brent Betterly, referred to by the media and their supporters as the “NATO 3” appeared today in Cook County Criminal Court. The three activists were arrested as part of a midnight raid days before the NATO Summit and were subsequently charged with terrorism-related charges. People’s Law Office attorneys Michael Deutsch and Sarah Gelsomino represent Brian Jacob Church and are working closely with the defense attorneys for the other two defendants.

The defense attorneys were told that the three activists had been indicted by a grand jury, but the Cook County State’s Attorney prosecuting the case refused to provide a copy of the indictment. Addressing the judge, Michael Deutsch said he didn’t understand why the defense could not see the official charges and the Judge agreed that it “seemed a little strange,” but deferred to the State’s Attorney.

At prior court dates, defense attorneys have raised that the investigation utilized informants who acted as provocateurs to set up protesters.

Typically, terror-related prosecutions are handled by the US Attorney’s Office and this is the first time the Cook County State’s Attorney would initiate charges under this terrorism statute. Questions have been raised by journalists and experts about this unusual prosecution.

Despite the limited information provided by the prosecution, the defense continues to prepare a strong defense to these outrageous charges. The next court date is scheduled for July 2, 2012, when the indictment is expected to be released.

Our work on this case is a continuation of our office’s longstanding commitment to defending activists who the government seek to discredit by labeling them as “terrorists” and charging them with trumped-up, politically motivated charges. This work has included defending Black Panthers, representing Puerto Ricans struggling for their independence, defending Muslim Americans criminalized after 9/11 and representing environmentalist and animal rights activists caught up the U.S. government’s “Green Scare.”