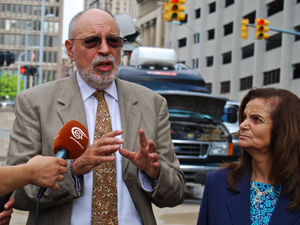 Palestinian-American community activist Rasmea Odeh is scheduled to go to trial in Detroit on Tuesday, November 4.  Odeh, represented by Michael Deutsch of People’s Law Office and attorney Jim Fennerty is being charged in Federal Court for failing to disclose a prior conviction in her immigration application to the United States.

The prior conviction was in Israel and related to a 1969 bombing at a supermarket in Jerusalem.  Odeh had been arrested, interrogated and tortured by the Israeli military.  As a result of the torture, she confessed to involvement with the bombing.

She served 10 years in prison in Israel and after she was released, she traveled to Geneva where she testified about the torture she suffered at the hands of the Israeli Defense Forces.  Odeh then lived in Lebanon and Jordan before immigrating to the United States in 1994.

Since living in the United States, Odeh has been an active member of the Palestinian-American community and became the deputy director of the Arab American Action Network (AAAN).  AAAN is a Chicago-based non-profit that provides services, organizes anti-discrimination campaigns and Palestinian solidarity work.

This Palestinian solidarity work has made AAAN the target of government surveillance.  In 2010 the AAAN was investigated by the FBI and the FBI raided the home of Hatem Abudayyeh, AAAN’s executive director.  As part of this investigation, the FBI wanted more information on Rasmea’s background and sent a request to the Israeli government to pull her file.

Rasmea’s case exemplifies the willingness of the federal government to use criminal legal system against the Palestinian-American community.  People’s Law Office is proud to represent Rasmea and to stand in solidarity with the people of Palestine.

Tortured and Raped by Israel, Persecuted by the United States by Dahr Jamail in Truthout

To learn more about the work of People’s Law Office defending those targeted by the government, read the Political Repression page on this site