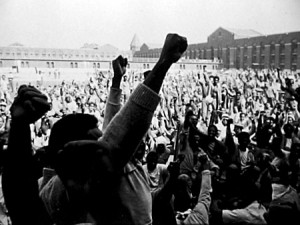 This week marks the anniversary of the Attica prison uprising and subsequent massacre by New York police officers and prison guards.  The rebellion began on September 9, 1971 and ended on September 13, 1971.

The rebellion was inspiring to many around the country and throughout the world in that it represented a growing movement fighting for human rights for prisoners.

People’s Law Office was among a group of civil rights attorneys around the country who immediately responded to the massacre and provided legal representation to inmates who were charged with crimes due to their involvement in the rebellion. Many of the participants, particularly key organizers, were subjected to abuse and torture by guards after the rebellion was suppressed. Lawyers from People’s Law Office, along with other civil rights attorneys, represented the Attica Brothers in a class action civil rights lawsuit which settled in 1999 for $12 million.

For more information on the Attica Rebellion and subsequent massacre:

Attica Is All Of Us from Freedom Archives on Vimeo.

For more on our work representing the Attica Brothers:

Portion of the History page on this site discussing Attica