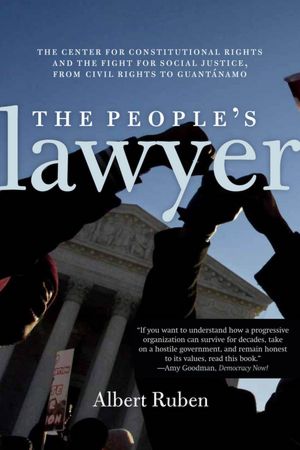 Review of The People’s Lawyer: The Center for Constitutional Rights and the Fight for Social Justice, from Civil Rights to Guantanamo, by Albert Ruben

The Center for Constitutional Rights (CCR) is a renowned organization that has been a pioneer in the progressive legal community since the Civil Rights era. Following September 11, 2001, the non-profit legal group continued to rise in national prominence, as it was at the forefront of the push-back against the Bush Administration’s attack on civil liberties and civil rights.

This legacy is explored in The People’s Lawyer: The Center for Constitutional Rights and the Fight for Social Justice, from Civil Rights to Guantanamo, written by Albert Ruben and recently released by Monthly Press.

Ruben addresses the historical context in which CCR was founded, with lawyers traveling to the South from around the country during the 1960’s to represent members of the Civil Rights movement. This legal work included defending activists who were arrested and charged criminally, along with bringing affirmative cases in federal court demanding local and state institutions act in accordance with federal civil rights laws.

The four founding members of CCR (Arthur Kinoy, Mort Stavis, William Kunstler and Ben Smith) were active in representing these movements and saw value in collectivizing to share resources, which led to the creation of CCR. The People’s Lawyer includes brief biographies of each of the founding members, addressing the unique backgrounds and personalities of each attorney. It is interesting to see how each individual’s idiosyncratic qualities and strengths, when brought together, allowed the organization to develop and flourish.

Ruben also exposes the limitations of a Leftist institution developing with so much relying on the specific individuals who established it. This became apparent as CCR began to grow in size and scope, bringing on attorneys who had politics and interests that diverged from the four founders. This divergence became particularly visible as the Women’s Movement of the late 1960’s and early 1970’s began to influence the political issues of the era and the vision of the four male founders failed to embrace issues that specifically impacted the lives of women, such as abortion. This didn’t prevent CCR from litigating the issue of abortion, but as Ruben describes it in the book, the credit for CCR getting involved in this work goes to the young attorneys who had recently joined the organization, particularly female attorneys such as Nancy Stearns, who had become a staff attorney in 1969. CCR’s legal strategy in abortion cases was also unique as they had an analysis of gender justice, as opposed to the rights of the physician, which was the approach of many other attorneys who handled the issue at the time. Again, this is largely a result of female attorneys like Stearns and Rhonda Copelon, who joined CCR in 1971. The work CCR did in the 1970’s fighting for women’s rights is a clear example of the organization adapting to changing times and integrating legal cases with social movements organizing around the core issues.

In this fairly concise book, Ruben is able to cover a great deal of territory about CCR and its approach to the law. In addition to describing its history, founders and its ability to adapt to political changes, he also addresses the decision to take on Guantanamo as a key issue, tension between the CCR staff and the board that led to the staff going on strike, CCR’s emphasis on education and short descriptions of a number of the significant legal cases litigated by the organization.

Reading the book as a staff member of People’s Law Office (PLO), it is hard not to look at the interwoven histories between PLO and CCR, as PLO has interacted with and had a relationship with CCR for many years. In 1969, as PLO was a newly developed law collective, the infamous case of the Chicago 8 was being tried by CCR co-founder William Kunstler. The young attorneys and law students of PLO would attend trial and became acquainted with Kunstler who along with CCR co-founder Arthur Kinoy, played a mentorship role to the founding members of PLO. Michael Deutsch, a partner here at PLO was hired as legal director of CCR in 1991, a position he held for nearly five years before returning to PLO. Throughout the years, our organizations have collaborated, sometimes on cases, such as the civil lawsuit resulting from the murder of Fred Hampton and the defense of the rebelling Attica brothers. We have also done educational work together, including speaking together about torture and other issues and working together on writing projects, including recent statements in support of CeCe McDonald.

Beyond these moments when we have collaborated, the relationship between our two organizations is primarily that we are fellow travelers in the long struggle for social justice. We have similar priorities, face similar challenges and ask ourselves the same questions about what it means to provide legal support for progressive movements for social change.

In The People’s Lawyer, Ruben does an excellent job in raising these critical questions about the role of lawyers in the struggle for social justice and human rights; What does it mean when your client is not just an individual but a social movement? How does it change the way we practice law when the goal is not only for the case to be successful in court, but for it to also be used as an organizing tool? How can progressive legal organizations obtain the necessary financing without sacrificing their principles? In a capitalist society, how should an organization compensate its attorneys and staff fairly, particularly with limited funding? How should you evolve and adapt to changing social movements without losing your core principles? What does it really mean to be a “people’s lawyer?”

The People’s Lawyer is a great resource, not only for those who wish to learn more about CCR, but to anyone interested in exploring the potential role of lawyers in movements for social change and raising these questions while acknowledging that there are no simple answers.