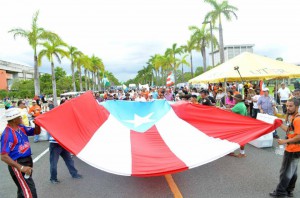 May 2014 was an exciting and historic month in the three decade long campaign to free Puerto Rican Political Prisoner, Oscar López Rivera. Oscar is the longest held Puerto Rican Political Prisoner convicted in  U.S. federal court for seditious conspiracy for his commitment to the independence of Puerto Rico. Commemorating the anniversary of his 33 years in captivity, the campaign for his release organized “la Caminata Nacional 33 en 33 por Oscar.” (33 in 33 Walk for Oscar). This walk began April 27 in the small central
town of Gurabo and toured 33  towns in 33 days to raise awareness about the case of López Rivera and to gather support for the  call for his release.

Each day one town was connected with another in a  333 mile walk through winding mountainous roads. While a small, hearty core group of activists and supporters participated in consecutive daily walks, each town added its own flavor, sometimes its own mayor, and often hundreds of walkers —  an eclectic group of young people, seniors, athletes, elementary, high school and college students, unions, musicians, civic and religious groups, elected officials, those in wheel chairs  and the able bodied, pro-independence activists,  supporters of the present political status with the U.S., as well as supporters of statehood. 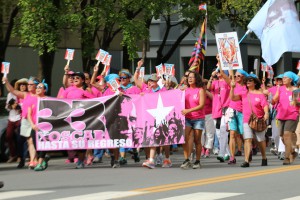 People in small rural villages and barrios stood and waited at their front gates for the “Caminata”. Passing cars blasted their horns and shouted their support. Children came out of their classrooms to shout approval and display signs they made themselves, of love and support for Oscar. Some schools even allowed their students to leave the classroom to join the walk.

When the walk reached each town’s plaza, a beautiful cultural event took place with music and poetry. Under a blazing afternoon sun, children sang while others read their writings dedicated to Oscar. 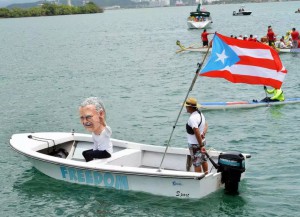 As the walk in the mountains was underway, another event took place in San Juan called “Al Mar X Oscar” (To the sea for Oscar), inspired by a letter from prison to his granddaughter Karina, in which he wrote, “… after the family, what I miss the most is the sea. It’s been 35 years since the last time I saw it.” On a beautiful Sunday afternoon on May 25, hundreds marched along the waterfront of Old San Juan while row boats, paddle boats, rafts, kayaks, fishing boats, long Asian inspired dragon boats, jet skis, practically anything that could float accompanied them. At the foot of the century old walls of the Spanish fort, El Morro, the water crafts landed with a “cabezudo” papier-mache puppet head representing Oscar wading on shore symbolically representing his arrival to Puerto Rico by sea. Oscar’s daughter Clarisa López and granddaughter Karina Valentín emotionally greeted the symbolic Oscar. At a cultural and political rally held in front of El Morro, Clarisa stated, “We are going to achieve what seems the impossible … returning my father to the motherland …” The multitude present shouted their approval. 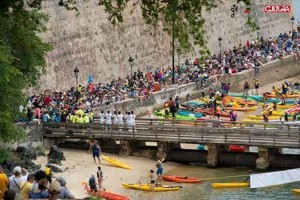 On May 29 the Caminata arrived in front of the Federal Building in San Juan after successfully visiting 33 towns in 33 days. In solidarity with the Caminata, Oscar walked 333 miles in those 33 days, in the prison yard. The women who meet the last Sunday of  every month on the Dos Hermanos Bridge demanding Oscar’s release marched from the bridge in Old San Juan to the Federal Building in the financial district of San Juan.Headed by Oscar’s daughter Clarisa and the President of the Bar Association, Ana Irma Rivera Lassén, dressed in pink t- shirts, with flags and posters with messages of support. Then the Caminata arrived, headed by a giant key held by some of the former Puerto Rican Political Prisoners released in 1999 by presidential commutation of their excessive sentences. Behind them were delegations from each of the towns that the Caminata had marched through, along with artists, athletes and members of different political parties as well as civic and religious organizations. The Mayor of San Juan, Carmen Yulín Cruz Soto, and former political prisoner Rafael Cancel Miranda were present. A rally of celebration and joy followed the end of the Caminata. Oscar’s attorney Jan Susler, a partner in the People’s Law Office, stated that the work in Puerto Rico around Oscar’s release was having positive results in the U.S. She mentioned that this year’s Puerto Rican Parade in New York was paying tribute to Oscar and calling for  his release. She said, “I ask you to continue with that consistency, that emotion that inspires us to continue working for Oscar’s release.”

The Puerto Rican people have sent a powerful message to the White House that we want Oscar López Rivera released from U.S. custody now. In the midst of the worst economic crisis the island has experienced in decades, high energy and food costs, mass exodus to the U.S., primarily of the young and the educated, a crumbling education and health system, a rise in crime and the insecurity and anxiety it creates; Oscar López has not been forgotten, and the call for his release is front and center. In a recent editorial of El Nuevo Día, the most widely read newspaper in Puerto Rico with a clear pro-American editorial position stated the following:

At 71 years of age and having served 33 years in remote prisons, far away from his country, accused of seditious conspiracy, but never having been found guilty of shedding any blood, Oscar López Rivera is the symbol of a flagrant dishonor for his jailers and an affront to democracy that fails to respect human rights. In spite of the unanimous demands of the people and from every sector, and important voices in the international community, Oscar López is still held in a prison in Terre Haute, Indiana. The United States government persists in ignoring the call for his release. The government of the United States is morally impeded from intervening on behalf of any political prisoner, in any place in the world, while the president continues to mock the memory of Mandela, violate civil and political rights and Oscar’s right to freedom. 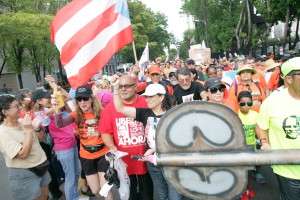 From his jail cell, Oscar López says, “I can’t afford to think about freedom. The future is very unpredictable and I have no clear idea of when I will leave prison. I don’t like illusory optimism.”  As a former Puerto Rican political prisoner myself, I can fully understand the need to guard oneself from such thoughts and dreams. Here in Puerto Rico, there is a mass sense of optimism and faith that President Obama will do the right and just thing and release Oscar. This optimism is not idealistic or unfounded but very much rooted in a proud history of witnessing our political prisoners walking out of the gates of U.S. prisons. Here, there is faith in the power of a united Puerto Rican people demanding in one loud, clear and unwavering voice “Free Oscar López Now!”