The December 9, 2012 broadcast of the CBS television program “60 minutes” focused on several men who were falsely convicted of murders, based on false confessions obtained by police in Chicago and Cook County. People’s Law Office currently represents two of the men who are featured in the program – Jonathan Barr and Terrill Swift – in civil rights lawsuits to obtain financial compensation for the years they unjustly spent in prison.

Jonathan Barr was part of the Dixmoor 5 – young African American men who were falsely convicted of raping and murdering their 14-year-old classmate in 1991. Despite a complete lack of any physical evidence connecting the young men to the rape and murder, police fabricated confessions by three young men who implicated themselves and two others. Even though the confessions did not match each other or the facts of the crime, all five were wrongfully convicted and sent to prison, Jonathan with a sentence of 85 years. Jonathan never gave up protesting his innocence and he was eventually able to establish that DNA evidence recovered from the victim showed that the sex assault and murder had been committed by a known sex offender, Willie Randoph. Jonathan was imprisoned until 2011 when he was released based on the DNA findings, and in 2012 he was awarded a Certificate of Innocence. People’s Law Office, together with the firm of Neufeld, Scheck and Brustin, filed suit on Jonathan’s behalf in October, 2012. 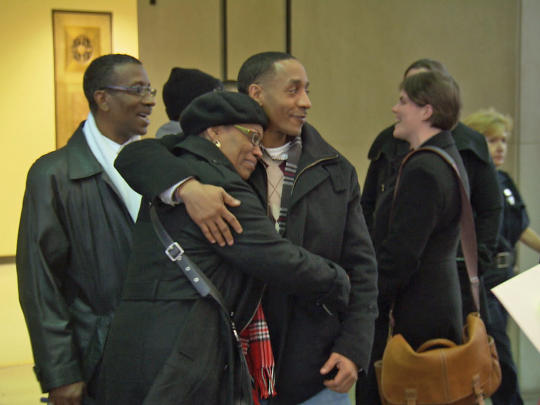 Terill Swift was one of the Englewood 4 – another group of young African American men who were falsely imprisoned based entirely on false confessions. Once again, no physical evidence linked any of the young men to the murder, and again the various confessions did not match each other. Despite this, all four were convicted, and Terrill was sentenced to 36 years in prison. DNA evidence later showed that the murder was actually committed by Johnny Douglas, a repeat sexual offender who was present when the body was recovered but who, incredibly, was not investigated by Chicago police at the time and who went on to murder at least two other women. Terrill’s conviction was reversed in 2012 and he was granted a Certificate of Innocence. PLO now represents Terrill in a civil rights lawsuit for damages, along with the MacArthur Justice Center and Northwestern University School of Law.

The “60 Minutes” episode was entitled “False Confession Capital” recognizing that Chicago has twice as many documented false confession cases as any city in the country and has been identified as the false confession capital of the United States. The program concluded that one reason may be the way police go about questioning suspects.

One of the most shocking features of both of these false confession cases is the complete failure of the Cook County State’s Attorney, Anita Alvarez, to recognize the injustices done to these young men and to take any steps to investigate how these wrongful convictions occurred. She still claims that it is “possible” that the young men committed the crimes, and actively opposed the Certificates of Innocence in the Englewood case. A judge rejected her arguments. The failure of Alvarez to investigate wrongdoing by the police is consistent with her record of turning a blind eye to police brutality, misconduct and corruption.

To learn more about our work on this issue, visit the Wrongful Convictions page and the Victories page to see past successful settlements and jury verdicts we’ve obtained for our falsely convicted clients.