THE LOOP — Hundreds of Amnesty International protesters rallied in Daley Plaza Friday to demand reparations for police torture victims of notorious Jon Burge, but the aldermen sponsoring a reparations ordinance were not among them.

About 200 protesters marched to Daley Plaza from the JW Marriott in the Loop, where Amnesty International USA is holding its annual general meeting this weekend. They carried banners bearing the names of the estimated 118 people tortured by Police Cmdr. Burge and his “midnight crew” from the ’70s into the ’80s. The city has paid Burge’s victims an estimated $57 million. 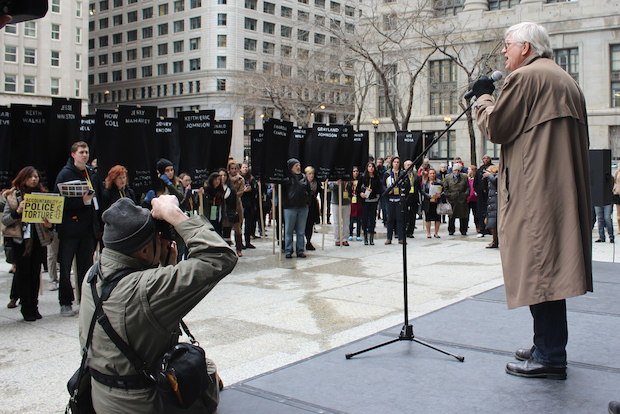 “This scandal will not end until all the men receive reparations for the torture,” said G. Flint Taylor of the People’s Law Office, one of the leading attorneys in the torture cases.

Protesters backed the reparations ordinance sponsored last year by Aldermen Howard Brookins Jr. (21st) and Joe Moreno (1st). It calls for the city to issue a formal apology to victims and create a $20 million fund for compensation, including medical and psychological treatment as well as vocational training and City College education, and for the subject to be taught in Chicago Public Schools.

Yet Brookins and Moreno did not attend the rally.

“They were invited, but this was an Amnesty International, a people’s gathering,” Taylor said. “We know they’ll be with us when the ordinance is heard in the City Council.”

“Let’s say that maybe they had other affairs to attend to,” Cannon added. “We’ll continue to press on.”

Brookins said he was unaware of the rally, but welcomed the support.

“I think the more hands in this the better,” Brookins said. “I need every hand on deck.”

The proposed ordinance has been on the Finance Committee agenda over the last few months, but has been deferred when Brookins, the sponsoring alderman, didn’t show up. He has kept a low profile at City Hall since his chief of staff was charged with bribery in February following a federal sting.

Joey Mogul, of the People’s Law Office, said Brookins’ commitment had not flagged.

“So at this point we’re going full speed ahead,” she added. “We’re gathering support for this ordinance. We think it can be passed, should be passed and will be passed.”

Brookins said he expected the subject to be on the committee agenda before the May City Council meeting.

“Ald. Moreno and I are looking for a way to do this so that we don’t get the pushback from the rest of our colleagues,” Brookins added. “We know it’s gonna be difficult because the city is strapped … but we think it’s the right thing to do.”

Amnesty International USA Executive Director Steven Hawkins said the group supports reparations, as they’re called for in the United Nations Convention Against Torture, which has been ratified by the United States. It forbids torture, but also establishes “what obligations governments owe victims of torture,” Hawkins added. “So our position here is that, yes, the city owes these guys.”

This article was originally published in DNAinfo Chicago. By, Ted Cox on April 4, 2014