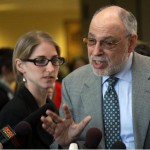 Brian Jacob Church, Jared Chase and Brent Betterly, three of the “NATO 5” appeared today in Cook County Criminal Court. The three activists were arrested in a midnight raid in Chicago’s Bridgeport neighborhood in the days leading up to the NATO Summit. They were subsequently charged with terrorism charges and several other felonies, which all three have plead “Not Guilty” to.

People’s Law Office attorneys Michael Deutsch and Sarah Gelsomino represent Brian Jacob Church, one of the activists who had planned to march against the NATO Summit in May. The three defendants have now spent over six months in custody at Cook County Jail, each on an unreasonably high bond of $1.5 Million.

Today’s court date addressed the status of discovery, which was scheduled to close one week from today, November 26, 2012. Thus far, through the course of the discovery phase, the prosecution has provided thousands of pages of documents and dozens of discs. However, there are numerous items which attorneys for the three defendants have specifically requested which have not been provided. In addition, there is content from several computers and electronics seized from the raid which has been placed on a 2 terabyte hard drive. A mirror image of that hard drive has yet to be turned over to the defense counsel.

The prosecutors from the Office of the Cook County State’s Attorney made a motion to extend the discovery deadline and Judge Wilson complied with that request. The Judge ruled that the new discovery deadline is February 25, 2013, which extends the timeline for the case schedule. The judge then scheduled a new trial date of September 16, 2013, one day before the two year anniversary of Occupy Wall Street.

The defense lawyers are disappointed and upset by the fact that the defendants will continue to sit in jail facing an insurmountable bond as the case proceeds as a result of the prosecution’s inability to comply with the judge’s original pre-trial schedule. However, in order to provide the best possible defense, it is crucial to obtain and review all the potential information and evidence that is in the State’s possession.

The next court date scheduled in the case is a status hearing set for January 2, 2013 at 10am in front of Judge Thaddeus L. Wilson (Court Room 303) at the Cook County Criminal Courts Building at 2650 S. California.

People’s Law Office and other attorneys from the National Lawyers Guild continue to defend the three activists against these trumped-up, politically motivated charges. People’s Law Office is involved in this case as part of a long-standing commitment to defend activists who the government seeks to discredit by labeling them as “terrorists.” To read more about our work defending dissent, visit the Political Repression and Free Speech pages on this site.