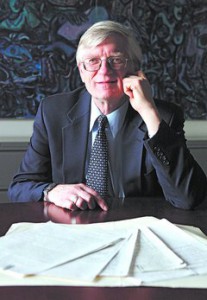 Last July, Federal Judge Rebecca Pallmeyer, in a precedent setting decision, upheld Tillman’s conspiracy claims against Daley. Last week’s settlement ended a year-long quest for Daley’s videotaped deposition, a quest that had first been met with refusal, then delay, and finally with an unresolved battle over whether his deposition would be publicly accessible. Both Tillman and his lawyers, while stating their disappointment that they would not be able to examine Daley under oath about his broad ranging involvement in the torture conspiracy, also emphasized that his wrongdoing was already powerfully demonstrated by the evidence in the public record.

That evidence establishes the following conduct, from 1980 to 1988, while Daley was state’s attorney of Cook County:

In 1982, Daley and his first assistant, Richard Devine, were specifically informed by Chicago Police Superintendent Richard Brzeczek that Andrew Wilson had been tortured with electric shock, burned on a radiator, and savagely beaten at Area 2 police headquarters by Jon Burge;

Daley and Devine refused to investigate Wilson’s torture or direct Brzeczek to do so, but rather publicly commended Burge for his conduct in the Wilson case;

As a result of Daley’s failure to investigate or prosecute Burge for the torture of Wilson, scores of additional African-American men, including Tillman, were subsequently tortured, gave false confessions, and were convicted and imprisoned, some on death row;

Despite his knowledge about police torture, Daley approved the seeking of the death penalty in at least 10 police torture cases, including Tillman’s;

In 1987, after the Illinois Supreme Court reversed Andrew Wilson’s conviction and death sentence because of the overwhelming evidence of torture, Daley again refused to investigate Burge and his men.

In 1989, Daley began his 20 year reign as Chicago’s mayor, and his involvement in the torture scandal continued apace:

From 1989 through 1991, as the torture conspiracy began to unravel, Daley was repeatedly presented with evidence of systematic torture and political demands to act, including from Amnesty International, at several City Council hearings and at demonstrations at City Council and his home, but he refused to respond in any way;

In 1992, after the court ordered release of an internal Office of Professional Standards Report which found that “certain command personnel” participated in, and were aware of, “systematic abuse” and “planned torture” at Area 2, Daley, rather than accepting the report’s findings and taking corrective action, instead joined his police superintendent, who was implicated by the report, in publicly denying that systematic abuse had occurred while condemning the report as “lies,” “rumors,” and mere “allegations;”

In 1996, after several accusations of torture had been sustained by OPS investigators against one of Burge’s primary co-conspirators, Daley nonetheless used his mayoral powers to promote him to lieutenant;

In 2006, special prosecutors who were closely connected to Daley’s father, Richard J. Daley, and the Daley machine refused to indict Burge or any of the other alleged Area 2 torturers, and absolved Daley and Devine, who was then the state’s attorney of Cook County, of any accountability for the torture scandal;

During the entire 20 years he ruled as mayor, Daley refused to break the city’s ties to Burge, approving payment of approximately $15 million in fees to lawyers who were retained to defend Burge in a series of damages cases;

Daley refused to apologize to the torture victims, even after the special prosecutor found that Burge and his men had tortured with impunity, and again after Burge was subsequently indicted by federal prosecutors and convicted of perjury and obstruction of justice.

These are the disturbing “highlights” of Daley’s 30 years of involvement in the police torture scandal. At every turn, he refused to use his unparalleled power, first to stop the torture, then to end the cover-up, assume responsibility, and bring the torturers to justice. If Daley had acted in 1982, scores of African-American men would not have been tortured and sent to prison. Moreover, if he had acted in 1982, in 1987, or even as late as 1992, Burge would have been prosecuted and sentenced for the serious violent felonies of serial torture and its cover-up, rather than for perjury and obstruction of justice; his men would have been subjected to similar prosecutions; the city and county would not have invested more than $53 million in public funds to cover Burge’s crimes; and the continuing stain on the conscience of Chicago as the torture capital of the United States would have been eradicated long ago. This deep complicity in the torture scandal is the real legacy of Richard M. Daley.

For more info on the work of People’s Law Office in fighting for justice for torture survivors, visit the Chicago Police Torture page on this site