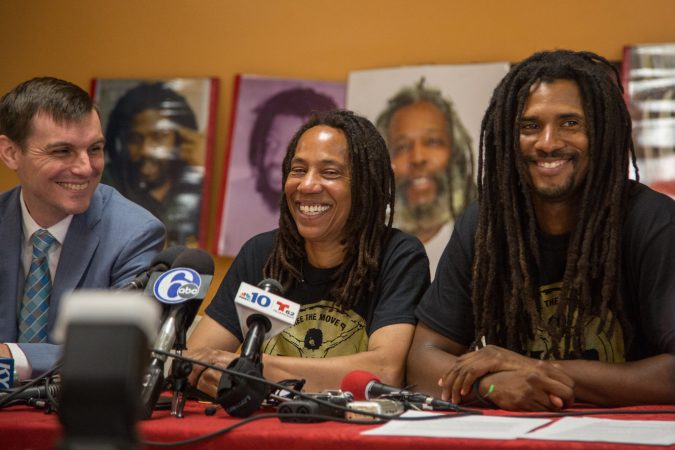 On Saturday, June 16, Debbie Africa of the MOVE 9 was released from Pennsylvania state prison. Debbie was granted parole after spending 39 years, 10 months in prison.

Debbie was imprisoned since August 8, 1978, following an altercation between the Philadelphia police and the MOVE Organization. Debbie was one of 9 MOVE members, collectively known as the “MOVE 9,” who were convicted and sentenced to 30-100 years in prison following the 1978 altercation, despite evidence that exonerated them.

Debbie was eight months pregnant at the time of the 1978 incident and gave birth in jail to her son, Mike Africa Jr. (pictured above). Debbie has been incarcerated for Mike’s entire life and the two spent time together outside of prison for the first time following Debbie’s release.

People’s Law Office attorney Brad Thomson, along with lawyers from Abolitionist Law Center in Pennsylvania, represented Debbie in her application for parole. Unfortunately, Janet Africa and Janine Africa, two other members of the MOVE 9, were eligible for parole at the same time as Debbie and we denied.

MOVE is a Philadelphia-based radical, Black-led liberation organization opposed to environmental destruction and state violence. On May 13, 1985, seven years after the arrest of the MOVE 9, the Philadelphia police infamously dropped a firebomb on the MOVE home, killing 11 people, including 5 children and allowing over 60 homes to burn to the ground.

Debbie Africa after her release from prison, with Brad Thomson, one of her attorneys.

For more information, see:
The website for the MOVE Organization

“This is Huge”: Black Liberationist Speaks out After Her 40 Years in Prison – The Guardian

After 40 Years, Debbie Africa of MOVE 9 Released From Prison – WHYY

One MOVE 9 Member Gets Parole After 40 Years – Metro