CHICAGO, March 4, 2015 – Today, the People’s Law Office held a press conference announcing the filing of a federal civil rights lawsuit against the City of Chicago and Chicago Police officers responsible for the fatal shooting of nineteen year-old Roshad McIntosh.  The case is brought on behalf of McIntosh’s 3-year old son.

On Sunday, August 24, 2014, Roshad McIntosh was on the 2800 block of West Polk Street when Chicago police officers confronted him and his companions.  Roshad began to flee, but quickly surrendered at a neighboring residence.  Despite his surrender, Chicago police officers shot at Roshad, who was unarmed, without cause or provocation, and killed him.

Cynthia Lane, Roshad’s mother, stated: “I lost my son, he was taken from me.  I’m really hurt.  Roshad’s death has affected me emotionally in ways I never knew were possible.  The law suit will never bring him back; but it will help answer a lot of questions that we have.  Our family needs to know why they shot and killed him.” 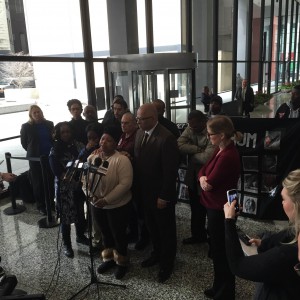 The Chicago Police Department has yet to identify the officers responsible for Roshad’s death or release any information regarding investigation into the shooting.

Roshad’s death has been highlighted at BlackLivesMatter actions throughout the city.  He was killed just a few weeks after the killing of Michael Brown in Ferguson, Missouri, which enraged the nation and set off nationwide protests over the killing of civilians by law enforcement officers and other systemic police violence against people of color.

The lawsuit alleges that Roshad’s death resulted from the City of Chicago’s failure to adequately train, supervise, and discipline officers who shoot civilians, and failure to thoroughly investigate police shootings.  This misconduct is allowed to continue unchecked due in large part to a police code of silence which serves to protect police officers who violate the Constitution.

“The death of Roshad McIntosh was beyond tragic and is unjustifiable.  It is unconscionable that the City of Chicago continues to fight transparency and shield the wrongdoing of their police officers instead of thoroughly investigating this and other instances of police violence,” said Sarah Gelsomino, a lawyer with People’s Law Office representing the family of Roshad McIntosh.  “This lawsuit seeks not only justice for the family of Roshad McIntosh but to finally bring to light the circumstances of Roshad’s death, which the CPD has kept hidden from his family and from the public.”