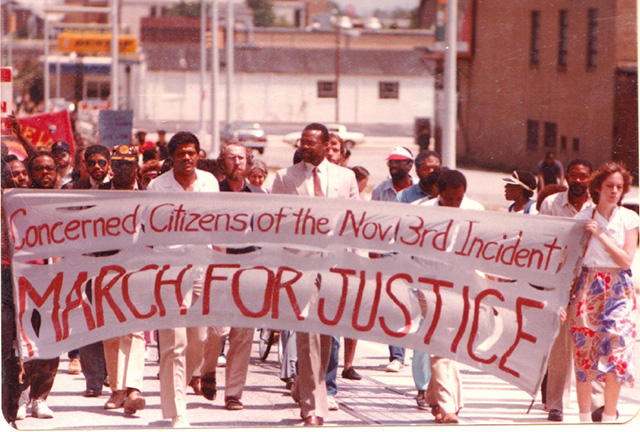 Activists display a sign in a March for Justice after the deadly Greensboro Massacre that took place on November 3, 1979. (Photo: The Romero Institute)

Thirty-eight years ago, on November 3, 1979, 35 heavily armed members of the Ku Klux Klan and American Nazi Party drove nine vehicles through the city of Greensboro, North Carolina, and opened fire on a multiracial group of demonstrators who were gathering at a Black housing project in preparation for an anti-Klan march. In the most deadly 88 seconds in the history of the city, the KKK and Nazi marauders fired over 1,000 projectiles with shotguns, semi-automatic rifles and pistols, leaving five of the march leaders dead and seven other demonstrators wounded. Most of the victims were associated with the Communist Workers Party (CWP) — a militant, multiracial organization which had been organizing in the South against the Klan.

The Greensboro police, the FBI and the Bureau of Alcohol, Tobacco and Firearms (ATF) were all aware of the plan to attack the march. However, no law enforcement officials were present except for a police informant-provocateur, Edward Dawson, who led the caravan into the housing project, and his control agent, Jerry “Rooster” Cooper, a Greensboro intelligence detective who followed the caravan and reported on its progress to the Greensboro police. Four television crews were on hand and captured the attack on video.