After a community cleanup in Englewood, volunteers end up in violent confrontation with dozens of cops. 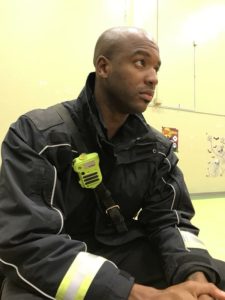 On an April afternoon in 2017, 35-year-old Vairrun Strickland came to the intersection of 63rd and Ashland in Englewood with dozens of other people wearing black T-shirts and brandishing green, red, and black Black Liberation flags. As part of New Era Chicago, a community service and black empowerment group, Strickland and the others were there to clean up the neighborhood and mingle with residents. A firefighter with the Markham Fire Department who grew up in Englewood, he’d helped organize similar cleanup outings in other south- and west-side neighborhoods.

“We walk through the neighborhood with our New Era T-shirts and we pick up trash,” Strickland explained in a recent interview with the Reader. “While we’re doing that we make little chants to promote black love. We also go door-to-door and pass out literature to support black-owned businesses in the neighborhood.”

Nothing about that morning was unusual, he said. As the procession wound its way from block to block, kids and neighbors joined in to help pick up bottles and food wrappers from vacant lots. A police car trailed the group for the three hours they were out there—something that always happens during New Era’s outings, Strickland said, despite the group’s having asked the Chicago Police Department not to send escorts so as not to discourage engagement with local youth who might be wary of cops.

Read the full article in the Chicago Reader.