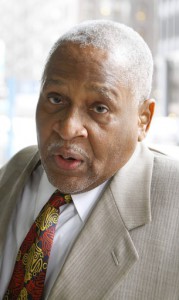 On September 10, 2012 the Finance Committee of the Chicago City Council approved a $950,000 settlement for 80-year-old police torture victim Oscar Walden, the penultimate event in Walden’s 60 year battle to obtain justice. The settlement will now go before the full City Council for final approval on Wednesday September 12, 2012.

In January of 1952, 20-year-old Oscar Walden was arrested by Chicago police for the rape of a 50-year-old white woman that had occurred on Chicago’s south side months before. He was taken to the station and tortured by a brutal detective who threatened to hang him, lynching style, with a rope. Walden, who had never before been arrested, gave a false confession, and the police obtained the rape victim’s identification by parading Walden before her and compelling him to apologize to her. Walden was convicted on the basis of his confession and the victim’s tainted identification, and he was sentenced to 75 years in the penitentiary for a crime he did not commit.

Walden continued to protest his innocence from his prison cell, and with the help of renowned civil rights attorney George Leighton, was released on parole 14 years later. He next sought a pardon from the Illinois governor, which was granted in 1977. However, the pardon was not on the basis of innocence, so Walden, who had become an ordained minister and accomplished poet, continued his quixotic battle for complete vindication.

Finally, in January of 2003, Governor George Ryan granted Walden an innocence pardon, and this paved the way for Walden to bring a civil damages action in federal court, which People’s Law Office lawyers filed in January of 2004. Since all of the police and prosecutor defendants, as well as the rape victim, were long deceased, Walden’s lawyers were compelled to sue the City of Chicago as the sole defendant under a theory that its police department had a pattern and practice of torturing African-American suspects accused of raping white women that predated Walden’s arrest…

Over the next six years, the city fought the case tooth and nail, retaining the private law firm of Andrew Hale and Associates, whose lawyers made every move possible in a vain effort to obtain the dismissal of the case before trial, while Corporation Counsel, Mara Georges, refused to make a reasonable settlement offer. In February of 2011, the case went to trial before Judge Ruben Castillo and a jury.

Walden was the only living witness who could testify about his torture and professed innocence. To prove their case against the city, Walden’s lawyers relied on a mosaic of musty documents, reports and studies, including the Wickersham Commission’s 1931 Report on Lawlessness in Law Enforcement, as well as the testimony of a Chicago police history scholar, and of 99-year-old George Leighton.

The city put on a defense, in the teeth of the innocence pardon, that Walden was nonetheless guilty, and presented the 1952 criminal trial testimony of the rape victim, the police officers and prosecutors through actors posing as witnesses. Andrew Hale and his partner Avi Kamionski, who collected approximately $375,000 in fees defending the city, repeatedly drew the wrath of the judge by making unfairly prejudicial arguments before the jury, and tendering to the jury highly prejudicial evidence about the rape that the judge had specifically barred.

The jury returned a verdict for the city, but Walden’s lawyers continued to fight the case, moving for new trial based on the pattern of misconduct before the jury by Hale and Kamionski. In March of 2012, Judge Castillo granted Walden’s motion, finding that:

The cumulative effect of these occurrences, when viewed in the context of the entire trial, unduly prejudiced Walden’s case… The improper conduct tainted the trial from opening statements through closing arguments and the court is not confident that the sustained objections, admonishing counsel, and jury instructions minimized the harm that resulted from the numerous inappropriate statements, questions, and arguments that occurred throughout trial.
— Walden v. City of Chicago, 2012 U.S. Dist. LEXIS 30962 * 40-41 (N. D. Ill. Mar. 6, 2012).

The court further found that Hale and Kamionski’s “repeated ill-advised actions in this case” crossed “the bright line between aggressive advocacy and ‘win at all costs’ unethical conduct.”

Walden’s counsel then moved the judge to sanction the city and its counsel for their misconduct. In the motion, Walden’s counsel pointed out that Hale and his associates had been paid more than $20 million by the city over the past nine years for defending police officers accused of abuse. The city removed Hale and Kamionski from the case, and these lawyers obtained private counsel to defend them on the motion. The city later claimed that it had investigated the misconduct, and had concluded that while “there were errors and lapses in judgment in certain instances,” it “did not find evidence of ethical violations that would warrant removal.”

Consequently, the city has continued to retain Hale, Kamionski and their associates in numerous other cases, including as counsel for notorious police torturer Jon Burge.

Faced with the specter of substantial monetary sanctions and a re-trial where the playing field had been leveled by an irate judge, the city’s new Corporation Counsel chose instead to offer Walden a reasonable settlement. As a result, at long last, in this remarkable case, a case that has exposed a sordid history of racism, police torture and systemic injustice in Chicago that mirrored the injustice of the Scottsboro case and foreshadowed the Jon Burge era of Chicago police torture, Oscar Walden now stands on the threshold of obtaining the final piece of vindication in his 60 year fight for complete justice.

To see more about our civil rights cases regarding false imprisonment, visit our Wrongful Conviction page