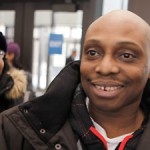 First off, I want to say that I am very relieved that my 26 year nightmare is finally ending. I was tortured and convicted of crimes for which I am completely innocent. I spent 23 ½ years in prison, and every day I still feel the awful mental pain that my torture and wrongful imprisonment has caused me and my family. No amount of money can fix that feeling and the freedom I lost, but I am pleased that the City and the County, by paying these settlements to me, have finally recognized that their people did me wrong

I am sorry that Mayor Daley will not be questioned in my case, but that does not change the fact that he did me and my family wrong. Not only that, but he did at least another 100 torture victims wrong while he was States Attorney and Mayor. If he had done what he should have, I would not have been tortured, lived with the fear of the death penalty, or sent to prison. To me, this settlement proves that Daley, Jon Burge, and Burge’s torture crew did me terribly wrong.

The evidence in my case shows without doubt that I am innocent and was tortured as part of a longtime conspiracy led by Jon Burge to torture confessions from black men. I feel that Mayor Emanuel, speaking for the City, should definitely apologize to me, to my family, and to everyone else who suffered because of this conspiracy.