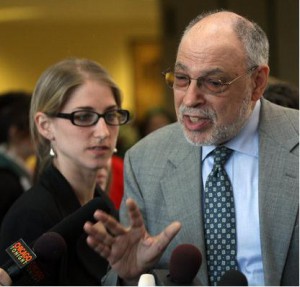 Yesterday, March 19, People’s Law Office attorney Michael Deutsch argued before Judge Thaddeus Wilson that the terrorism counts filed against the NATO 3 should be dismissed based on the unconstitutionality of the Illinois terrorism statute.

In lieu of the usual courtroom, a larger courtroom was used in order to accommodate the over 40 supporters that were in attendance. During the hearing, Deutsch argued that the state terrorism statute used to charge Brian Jacob Church, Jared Chase, and Brent Betterly is unconstitutional on its face and as-applied to the three young activists.

Deutsch opened by articulating that this case concerns not only the defendants, but to everyone in this state and beyond.  Due to the vagueness of many of the terms in the statute, people in Illinois or coming to Illinois are not given notice about what actions could fall within the state terrorism statute.

First, Deutsch cautioned that the statute is facially unconstitutional because it potentially sweeps in protected First Amendment conduct and because the statute lacks a culpable mental state, allowing for the potential criminalization of innocent conduct. Deutsch pointed out that, under the Illinois terrorism statute, a group of activists emailing their legislative representatives could potentially be charged with terrorism if the amount of emails shuts down the server.  Deutsch referenced examples where this has occurred, which were cited in Defendants’ Reply in Support of the Motion to Dismiss.

Additionally, Deutsch argued that the statute fails to identify a culpable mental state and it does not require acts be committed with the use force or violence.  Nor does the statute even require the commission of a crime. Deutsch noted that this is a significant departure from other states, who have identified the commission of a state or federal crime as a predicate for terrorism charge. This makes the statute overly broad and unconstitutional and creates the potential for arbitrary and politically-motivated prosecutions.

Judge Wilson indicated that he intends to have a ruling by the next court date.  The next court date will be Wednesday, March 27th at 2pm at the Criminal Court Building at 2650 S. California. The status hearing will take place in courtroom 303, which is Judge Wilson’s assigned court room.