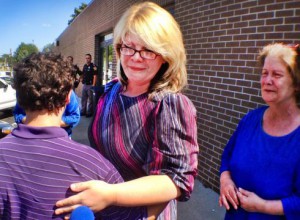 People’s Law Office has filed a civil rights lawsuit on behalf of Kristine Bunch, who was falsely convicted in 1996 of the arson murder of her three-year-old son.  Kristine was the victim of junk arson “science” in which fire investigators made unsubstantiated and unscientific claims that fires were arson, when in fact they were entirely accidental.  In Kristine’s case, when the investigators found evidence that the fire was not intentionally set, they deliberately suppressed those findings and rewrote their report to hide the exculpatory information.

Kristine’s case was tragic from the outset.  A young single mother, she lived in a mobile home in southern Indiana with her beloved three-year-old Anthony.  Early in the morning of June 30, 1995, fire roared through her home.  Although she tried to rescue Anthony, who was sleeping in a separate room, the fierce flames drove her back and she was unable to reach him.  Devastated, she tried to assist investigators to determine what had caused the fire, but, in the words of the lawsuit, these investigators “wrongfully lept to the conclusion that she had intentionally set the fire and then proceeded to fabricate evidence that supported, and hide evidence that undermined, that incorrect conclusion.  Years later it was revealed that the evidence which caused Plaintiff’s conviction was fabricated and unreliable and that these Defendants had deliberately suppressed evidence which showed that the fire was not arson, but was in fact accidental.”

Although there was no motive for Kristy to kill her son- she was a devoted mother who loved to care for and play with Anthony- that did not stop investigators.  After leaping to their deeply flawed conclusion, the investigators destroyed the likely cause of the fire- faulty wiring which had previously caused multiple electrical problems in the home.  The Indiana investigators identified what they claimed were “pour patterns,” where fire accelerants had supposedly been poured, and sent this evidence to federal investigators, telling them to find the chemical residue of such accelerants.  When the federal agency found that there were no traces of accelerants in the areas where there were allegedly “pour patterns,” the state and federal authorities changed the report to falsely claim that there were such traces.  Additionally, the investigators also falsely claim that there were such traces.  Additionally, the investigators also falsified the report by failing to reveal that all the chemical residues that were found in the home were consistent with kerosne, which was caused by the use of a kerosene heater in the home for several years.

As a result of the suppression of the exculpatory portions of the report, Kristy was convicted and sentenced to 60 years in prison.  After several years of incarceration her case was investigated by the Center on Wrongful Convictions at the Bluhm Legal Clinic at Northwestern University School of Law.  During this investigation, the Clinic discovered the suppressed reports of the investigators, and was also able to establish that any conclusions that the fire was intentionally set were based on junk science, where arson investigators repeated opinions as to the origins of fires that had no basis in science.  In 2012, the Indiana Court of Appeals reversed Kristy’s conviction, finding that the State had violated her constitutional rights in suppressing the exculpatory reports and that if this evidence had been disclosed back in 1996 she would not have been convicted.

Kristine suffered mightily as the result of the wrongful prosecution and false conviction.  She was forced to give up custody of her new baby, born after the fire, and lived for 17 years in prison, knowing that she was innocent but, realistically might never be able to overturn the conviction and gain her release.  While this lawsuit can never regain the lost years of Kristy’s life, we intend to obtain compensation for those lost years and obtain redress against investigators who must be held accountable for their unsubstantiated opinions and their suppression of evidence.

Read the complaint in her civil rights lawsuit.

Read more about our work on this issue on the Wrongful Convictions page.