On Wednesday June 25, 2014, an historic $40 million settlement was reached between the Illinois State Police and the Dixmoor 5.  The settlement has been called the largest wrongful conviction settlement in state history and was announced less than a week after the news of a similar settlement for the Central Park 5 in New York City. 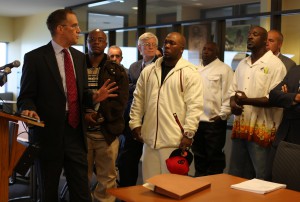 The Dixmoor 5 were young African American men who were falsely convicted of raping and murdering their 14-year-old classmate in 1991. Despite a complete lack of any physical evidence connecting the young men to the rape and murder, police fabricated confessions by three young men who implicated themselves and two others. Even though the confessions did not match each other or the facts of the crime, all five were wrongfully convicted and sent to prison.

Jonathan, who was 14 years old at the time of the crime, was convicted in 1997 and given an 85 year sentence.  Jonathan never gave up protesting his innocence and was eventually able to establish that DNA evidence recovered from the victim showed that the sex assault and murder had been committed by a known sex offender, Willie Randoph. Jonathan was imprisoned until 2011 when he was released based on the DNA findings, after spending 18 years in prison.  In 2012 he was awarded a Certificate of Innocence.

While this settlement vindicates Jonathan and the other four men and compensates them for the injustice they suffered, this can never give them back the years they spent behind bars for a crime they did not commit.  Civil rights cases like these are part of the struggle to hold police and prosecutors accountable for the systemic injustices inherent in the criminal legal system.

For more information on the case:
Read the Complaint in the civil rights lawsuit
People’s Law Office post when lawsuit was filedPeople’s Law Office commentary on the 60 Minutes piece covering Dixmoor 5 and other false confession cases in Cook County

To learn more about our work on this issue, visit the Wrongful Convictions page and the Victories page to see past successful settlements and jury verdicts we’ve obtained for our falsely convicted clients.