On June 14, 2018, Cook County Judge William Hooks, in a historic 119 page opinion that he read from the bench, overturned the conviction of Jackie Wilson and ordered a new trial. That opinion can be found HERE. Jackie Wilson is represented by Flint Taylor and John Stainthorp of People’s Law Office, along with Elliot Slosar of Loevy and Loevy.

In 1982, Wilson was tortured by Chicago police detectives and forced to confess to being involved in the fatal shooting of two Chicago police officers. This tortured confession led to his conviction and imprisonment for over 36 years.

Judge Hooks’ ruling is the result of an evidentiary hearing that has continued over the past several months. During the hearing, Wilson took the stand and emotionally described the abuse and torture he suffered at the hands of Area 2 detectives, including Jon Burge. Burge and the other detectives responsible for Wilson’s torture asserted their Fifth Amendment right and refused to answer any questions, and a voluminous record of the racist and systemic pattern and practice of Chicago police torture was also made part of the record.

Commenting on the ruling, People’s Law Office attorney Flint Taylor stated, “It was a courageous decision. It was the right decision, and it’s a decision that I think not only speaks to Jackie Wilson but all of the victims of police torture under the regime of Jon Burge.” Most significantly, it is the first time that a Cook County Criminal Court Judge has made detailed factual findings that document the decades long police torture scandal.

The latest chapter in this scandal implicates the Cook County Board and its “Special Prosecutor’s” Office that has continued to fight this case despite the overwhelming evidence that Judge Hooks has now adopted in his opinion. Upon hearing Special Prosecutor Mike O’Rourke – – whose law firm has already made more than $200,000 fighting the case – – – vow that he will immediately appeal the decision rather than abide by Judge Hooks’ award of a new trial, Taylor told the press that it “was well past time for the County Board and President Preckwinkle to stop this ‘pin striped patronage’ and demand that Special Prosecutor O’Rourke act in the interests of justice rather than at the beck and call of the Fraternal Order of Police, who has been calling the shots in Jackie’s case.

Judge Hooks will hear Wilson’s motion for a reasonable bond on Thursday June 21, 2018. 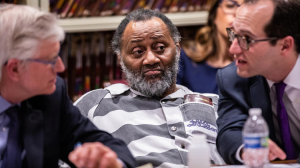