Last week, Chicago hosted the NATO Summit, which brought foreign heads of state and military generals to our city. It also brought thousands of demonstrators into the streets in opposition to NATO’s policies of war and the economic policies of many of the member countries of NATO.

During the summit, People’s Law Office was active in providing legal support to activists protesting NATO. For months, attorneys and staff from the office have been volunteering with the Mass Defense Committee of the Chicago chapter of the National Lawyers Guild (NLG), which has coordinated the legal support effort for anti-NATO protesters and other social justice activists in Chicago.

People’s Law Office has been proud to be part of the NLG Chicago’s Mass Defense Committee. We were part of the team of lawyers who negotiated with the City on behalf of organizations who wished to obtain permits for their protests. In the lead up to the protests, NLG members provided Know Your Rights trainings to activists and People’s Law Office staff helped in these presentations. Our staff and attorneys were also in the streets as NLG Legal Observers and helped staff the NLG’s 24 hour legal hotline. Lawyers from our office also visited arrestees in jail and appeared on their behalf in bond court and preliminary hearings and assisted in training other attorneys on how to defend protesters in court. 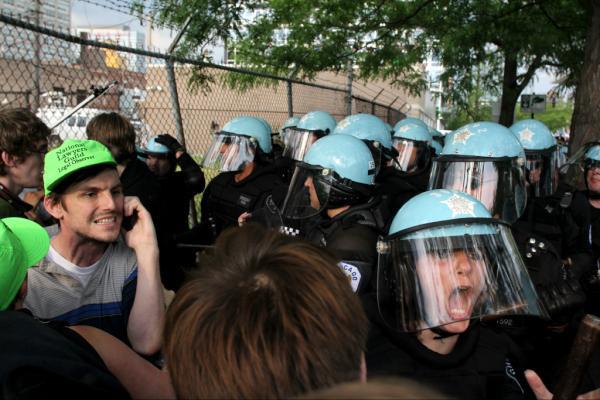 We consider the work supporting the protests against NATO a continuation of our office’s longstanding commitment to supporting movements for social change. However, the legal work from the NATO protests is long from being over. Our attorneys are representing a number of those who are facing charges, including Brian Jacob Church, one of the “NATO 3” who were arrested in a late-night raid in the Bridgeport neighborhood and charged with counts of terrorism. In addition, there are over 70 reported incidents of police brutality, which we are currently investigating and documenting.

Below is more information about the case of the “NATO 3” and some of the work of People’s Law Office and the Mass Defense Committee of NLG Chicago.

Video below of Sarah Gelsomino appearing on Democracy Now!

To read more about the work of People’s Law Office in defending protesters, visit the Protest and Free Speech page on this site.